Is It Really Worth It? 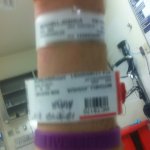 Ever wonder if what you’re doing is worth the effort?

Many times in life we get to a point where it just doesn’t seem like what we do matters.

It can be difficult to continue to move when you’re just not convinced that you’re headed in the right direction.

As we came to the end of 2012 Chris and I took a good long hard look at what we are doing with LIVE LIFE Revolution, and we asked ourselves if what we were doing was truly going to make an impact.

We prayed about it and asked for clear answers as to whether we were actually going to make a difference or not.

Since that time the response has been overwhelming. We have had a tremendous amount of positive feedback from people all over the word, but nothing sums it up as much as an email that we received the other day.

Over the Holidays Josh and his family were traveling in their van when they hit a patch of ice and were suddenly sent out of control stopping only when they slammed into a tree that kept them from careening down a hillside.

Most of the family escaped the accident with only minor injuries, bumps, scrapes and soreness. Josh however, suffered a broken femur and had to undergo surgery that would involve a rod and screws to be inserted into his femur to repair the damage.

One of his brothers would require a bit more care than that because of severe facial damage that occurred.

Currently Josh, his brother and the rest of the family are rehabbing, healing and trying to pick up the pieces so they can begin to move forward once again.

Now, here is the email that Josh sent us the other day…

So last week when I was in the hospital (and still now) I happened to be wearing one of the LIVE LIFE bands that I had gotten at one of the conferences Jim spoke at, and during the hospital stay there were times that seeing that helped me cheer up and not be downed thinking of what happened.

Thanks for what you guys are doing – it helps.

You never know how something so small that you do can have a massive impact to someone else when they are in a time of need.

Josh’s email was an answer for us. Yes we can make an impact with what we do.

So always remember that what you do is important and you will have an impact on the world around you if you are willing to continue even when it’s not easy to see the results of your actions.

So when the time comes where you wonder if what you’re doing is worth the effort, remind yourself to have FAITH enough to continue in spite of your doubt, be BRAVE enough to seek out the answers, be WILLING enough to accept the answers you get and DO whatever you need to do so that you have the impact you desire and LIVE LIFE!