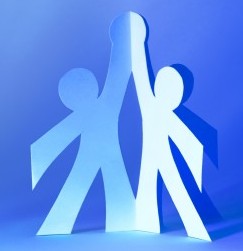 In 1977 Dusty Baker hit a homerun while playing baseball for the L.A. Dodgers. This was nothing new and certainly not out of the normal; Baker hit 30 homeruns that year alone. But this particular homerun would change the way we celebrate forever.

You see, his teammate Glen Burke was on deck that day and as Dusty touched home plate, Glen Burke raised his hand in the air and Dusty Baker slapped it as he went by.

Though probably not planned, that gesture was seen nationwide. The next few years, teams routinely imitated and innovated this celebratory action.

Now the high five is known around the world and is still used to celebrate achieving a milestone, doing something special or just because you feel like it.

Everyone loves giving and receiving high fives. Young, old, rich or poor it just feels good to be a part of a celebration.

So today, if you see someone do something special, extend your hand high above your head and give that person a high five. If you see a raised hand, slap it. Share in the joy of celebrating each other’s awesomeness today!